What is yoga? Is it an experience? Is it a mystical explanation for (the origin of) existence? Is it a collection of practices that help individuals make sense --cognitively or physiologically-- of their humanity (as it is inextricably intertwined with the universe)?

Every six months or so, I realize that I'm not really sure I know what I think yoga is. I start to question, again, everything I've learned and assumed to be true. The questions stay with me for weeks --in my thoughts, in my practices, in my teaching-- until maybe I come upon some minor epiphany and feel sort of comfortable again with what I think yoga is.

Sometimes, though, during those weeks of questioning I get to a point of

"Ah to hell with it, maybe the big Yoga thing isn't for me."

"But--" I think, "all those practices... all those simple, practical tools and lessons of yoga that make living my life more rich and joyful..."

Yeah, I'll stay for those, even if I'm not entirely sure what yoga is.

Yoga may very well be linked to religion, "spirituality" (still working out what that means, too), and a host of new ageisms that are insufficiently grounded in science and too-happily floating in anecdotes to satisfy me, but that doesn't necessarily remove the effects yoga's practices have on individuals who practice them.

Yes, sometimes those practices come bundled with ancient myths and unquestioned or cyclical explanations passed on from teacher to teacher. This fact doesn't by default necessarily make the practices any less effective (nor does it by default make them effective), and so I try to avoid letting it get in the way.

Because the practices --the simple breath observations, the simple moving of bones in a specific manner to strengthen and stretch the muscles, the simple sitting and focusing on a point to still the chatter of the mind-- those practices make yoga possible. Those practices are yoga. Yoga is practical by virtue of the need to practice tools for the sole purpose of effecting a desired change in your mental or physical condition.

But sometimes I --or you or anyone-- may write off all of yoga because of its esoteric packaging. This then might hinder the efficacy of the individual practices. Say you enter into a "calming breathing practice" with suspicion and hesitance. If you're insistent in your attitude, it's likely your mental state will overcome the efforts of the practice to change it, and you won't end up feeling calmer. On the other hand, if you're doubtful but come in with a willingness to have that doubt eroded, your initial attitude is much less likely to interfere.

On the other side of resistant suspicion is blind following and uncritical acceptance, perhaps simply "because yoga is ancient". Such following can lesson one's autonomy of experience. Sometimes that's useful. We all need occasionally to leave the decision making to someone else. In general, though, I wouldn't recommend it as a mode of being for a species that survives as much by learned wits as by the helpful coding of evolution. I think being conscious of our choices and actions helps us thrive.

So I --or you or anyone-- could choose to ignore the "unreliable" stories that can come with yoga teachings and just "stay for the practices". Many days, that's about the level I can engage with it anyway because questioning everything all the time can be immobilizing. 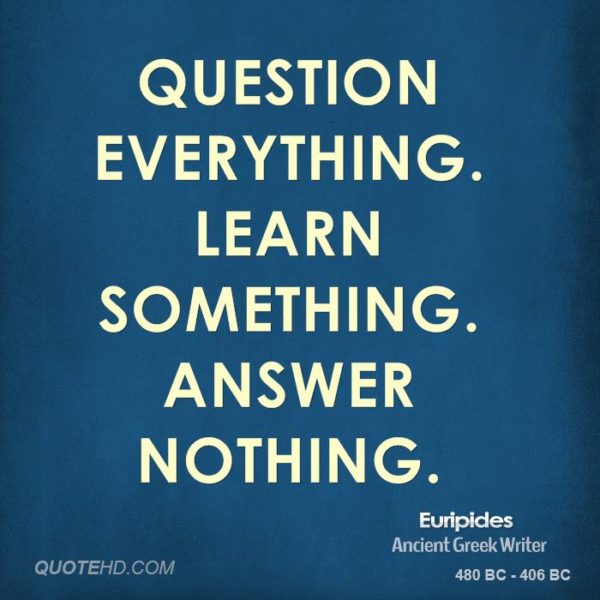 But hopefully, instead, questions do eventually come up. Or, better yet, we make a point to form questions. We make a point to hold yoga to a standard that doesn't allow the passage of assumed facts. Yoga is a living, breathing practice, which means it changes through the people who practice it-- and question it.

What is yoga? Yoga is a practice that brings us closer to awareness of ourselves and the universe by questioning everything, even assumed truths.

Thank you to yoga and science for inspiring my daily investigation.

« cause + effect in the real world | the practice of yoga »

Thoughts or questions? I'd love to hear them.